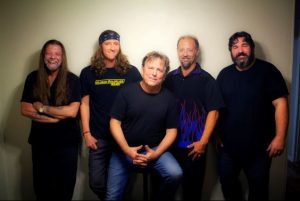 Allman Goldflies Band is bringing new energy to Southern music with honest, hard-driving, inspired performances. AGB features raspy-voiced bluesman, Gary Allman (cousin of the late Greg Allman) on vocals and keyboards, and critically-acclaimed bassist, David “Rook” Goldflies, formerly of the Allman Brothers Band. AGB’s performance is a celebration of classic Allman Brothers songs, original material from their upcoming debut album, and a unique selection of standard Southern rock anthems. The group is on track to become a leader and major contender in the new emerging breed of Jam Bands and Southern Rock music. Currently based in Panama City, Florida, they’ll be touring the U.S. soon.

Bert Holman, longtime Allman Brothers manager, asserts, “David Goldflies was discovered by Allman Brothers’ guitarist Dickey Betts at a very young age. He had the rare talent of being able to play the more intricate improvisational parts as well as traditional blues cadences.  During the second incarnation of The Allman Brothers Band, Goldflies was an essential member and part of the band’s success,” anchoring the Allman Brothers Band’s rhythm section with drummer Butch Trucks from 1978 to 1982 as the ensemble aimed for a wider audience. Though the ‘Brothers were not at their recording apex during the New Wave era, Goldflies and the band soared onstage during the ABB’s live gigs. David’s work on three Allmans’ releases –  Enlightened Rogues, Reach For The Sky, and Brothers of the Road – was critically lauded. “Goldflies’ valuable presence helped carry the genre and the band when the masses were paying more and more attention to pretty faces and big hair on MTV,” writes Tom Semioli in No Depression. Producer James Fairs, who wrote and produced the hit “I’m No Angel” by the Greg Allman Band, recalls, “while with the (Greg Allman) Band, I saw David, on a number of occasions, bring a set together with his bass solo, setting the stage, literally, for the rest of the show. Allman/Goldflies holds the potential of delivering a rich, new, and authentic chapter to an amazing American Music Story. They hold a card in one of the best decks around.”